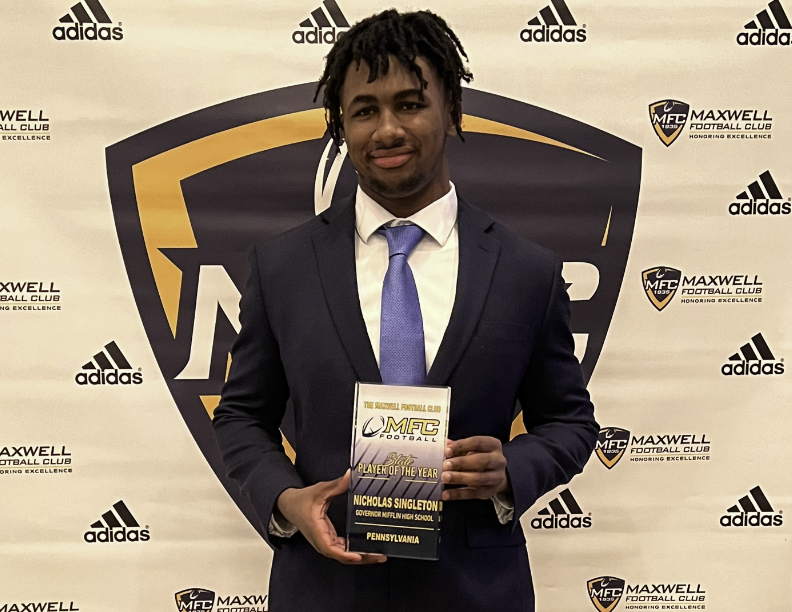 Maxwell Football Club President, Mark Dianno, announced Nicholas Singleton from Governor Mifflin High School in Shillington, PA as the winner of the 2021 Jim Henry Award. The award is named after legendary coach, official, and administrator Jim Henry and is given to a senior football player from the states of Delaware, New Jersey, or Pennsylvania that portrays a unique balance of football prowess, academic excellence, and dedicated community service.

Singleton, the nation’s top-ranked running back was also named the Maxwell Football Club/Adidas National Offensive Player of the Year and the Gatorade’s National Player of the Year after rushing for 2,043 yards and 41 touchdowns for Gov. Mifflin High, which went 10-1. He averaged 13.2 yards per touch, including 12.4 yards per rushing attempt, and scored every 3.89 times he touched the ball. Singleton was selected to play in the All American Bowl on NBC earlier this month and he will attend Penn State University.

“This year’s Jim Henry Winner dominated his opponents on the field with record-setting performances and proved himself as one of the best running backs in the nation. In addition to his on-field prowess, Nicholas Singleton is a sterling example of the hard work, dedication, and service that have become the hallmarks of Jim Henry Award winners.  The winner of the Jim Henry Award is always an excellent football player but must also set himself apart in the classroom and in the community at large.  Nicholas Singleton dedicated himself to his academic performance and still found time to volunteer and serve his community. Nicholas has indeed distinguished himself, his family, his school, his coaches, his program, and is a well-deserved winner of the Jim Henry Award as Tri-State High School Player of the Year. On behalf of the entire Board of Directors and all the members of the Maxwell Football Club, we congratulate and salute Nicholas on being the 36th Jim Henry Award Winner and wish him much success in his future endeavors.” – Mark Dianno – MFC President

Tickets for the Maxwell Football Club National Awards Gala are available for purchase on the Club’s website https://maxwellfootballclub.org/purchase-tickets/ or by calling 215-643-3833.

Questions concerning any of the Maxwell Football Club’s awards or programs can be directed to MFC Executive Director Mark Wolpert at info@maxwellfootballclub.org.

About the Maxwell Football Club

The Maxwell Football Club (MFC) was founded in 1935 and is a registered 501c3 Non-Profit Corporation. The MFC promotes and recognizes excellence at all levels of football from youth leagues through the professional ranks. Each year the MFC offers programs that focus on player and coach development, safety, and player wellness. The Club also presents many of the premier awards in the football world each year. Membership is open and additional information on the Club can be found at www.maxwellfootballclub.org.