Marvin Harrison Jr. gets back on track in leading St. Joe’s Prep by La Salle, 44-13

AMBLER, PA — No one is going to beat up Marvin Harrison Jr. more than 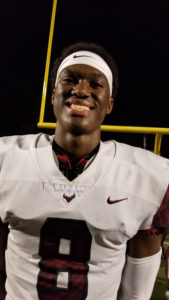 himself. The St. Joseph’s Prep 6-foot-4, 180-pound junior receiver already carries the burden of a famous surname, who happens to be his father, Hall of Famer Marvin Harrison.

Compounding that are expectations. Marvin Jr. is one of the country’s best high school receivers.

The Hawks opened with a rugged three-game national schedule this season and at times, Marvin Jr. showed flashed of how good he can be. There were other times when he didn’t. And he knew it.

So, there was a sense an explosion has about to happen—and on Friday night, against his old high school, it did.

Harrison caught four passes for 99 yards and a touchdown—in one half—in St. Joe Prep’s 44-13 demolition of La Salle Friday night at Wissahickon High School in what was supposed to be a statewide showdown between Philadelphia Catholic League Red Division rivals.

The victory propels the Hawks to a 2-2 record, while La Salle fell for the first time, dropping to 4-1 overall.

For Harrison, it meant a return to who he is.

He wasn’t happy. He knew he could have done better.

“I wanted to out on a show against my old team,” said Harrison, who transferred from La Salle to Prep his sophomore year. “I made some mistakes the first three games this season, I’ll admit it. I put a lot of pressure on myself, which had hurt me a little bit.

“That’s what I did the first three games. This game brought me back a little bit.”

It was good to see.

And it will pay dividends down the line for Hawks’ coach Tim Roken.

One player who was surely happy to see No. 8 back was Prep’s Ohio State-bound quarterback Kyle McCord, who completed 12 of 19 for 273 yards and three touchdowns.

“I think the first three weeks Marvin went against the best in the country and all of us wanted to make a point tonight and get back on track,” McCord said. “Marvin is locked in; he has that look in his eyes that he’s ready to go.”

Each time La Salle’s dangerous Sam Brown touched the ball he was swarmed by a host of Hawks. When the game was still competitive, Brown was held to four catches for 26 yards and five rushed for five yards.

Offensively, anything the Hawks wanted to do they did. Even when La Salle seemed to hold the Hawks, the Explorers had too many players on the field and Prep got another first down. The mistake wound turning into an Antonio Chada 25-yard field goal with :47 left in the third quarter—and a 38-0 Hawks lead.

The game was over at halftime. Probably even sooner than that.

Prep scored on each of its first five possessions to take a 35-0 lead. The Hawks pounded La Salle for 430 yards of total offense and 23 first downs in the first half, to La Salle’s 74 yards and five first downs. 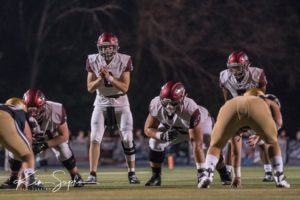 By halftime, Kobe Burrell had 121 yards on 14 carries with scores of 8 and 11 yards to get the Hawks going. Then it was Kyle McCord and the aerial game’s turn. McCord completed 12 of 18 for 273 yards, which included a 15-yard TD passes to Harrison, 10-yard pass to Anthony Rightley and 15-yard TD toss to Sahmir Hagans to finish the half.

It was thorough. It was dominating. It was scary good.

The only glitch for the Hawks, in an otherwise pristine first half, was seven penalties for 60 yards, including a late personal foul call that wiped out a McCord-to-Harrison 47-yard TD pass with 1:06 left in the first quarter.