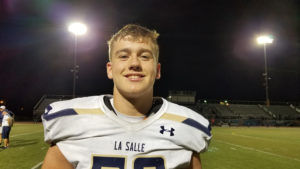 PHILADELPHIA, PA — Ryan Savage needed to make a change. The 6-foot-2, 215-pound La Salle senior defensive lineman dropped 20 pounds since last year. To get there, sacrifices had to be made. It meant eating a lot of roasted chicken. Perhaps the biggest commitment was cutting out brownies.

Savage figures it’s been about seven or eight months since he’s had a brownie.

It looks like the dessert diet and going cold turkey on the brownies has its dividends.

Savage made 12 tackles, including five tackles for losses and the game-clinching play in preserving La Salle’s 15-12 mild upset over Imhotep Charter Saturday night at the Germantown Supersite in the season opener for both teams.

La Salle used a 14-play, 95-yard, 7-minute, 2-second drive to win the game, when senior quarterback Jack Machita hit junior Tim Mehlmann with a 15-yard pass for the go-ahead score with 4:55 to play.

Trailing 15-12, Imhotep had a chance to reply starting at its 20. The Panthers reached their 46 and were faced with a fourth-and-seven with 1:46 left, when Savage cut through two offensive linemen and took down Jalen Sutton-Christian for a two-yard loss to secure the La Salle victory.

Savage had five tackles for minus-15 yards in losses.

It was a priority for Savage to become faster and quicker this season. That meant cutting out the sweets

La salle held Imhotep to 30 yards of offense from scrimmage in the second half and two first downs, after trailing 12-3 at halftime.

Imhotep scored on its second drive, when Sutton-Christian slipped into the end zone on a nifty nine-yard quarterback keeper. The Panthers added another score when a botched La Salle hook-and-lateral play was fumbled and scooped up by junior Shafeek Smith and took it 53 yards for a touchdown on the final play of the half.

“I’ve been telling the kids all summer we have to treat every opponent like a big, old oak tree, just keep chopping,” La Salle coach John Steinmetz said. “No one got frustrated. No one got mad at each other.

“Ryan Savage was a real leader in the offseason. But he built his strength and speed, and it really showed tonight. Imhotep is a really good football team, and I was happy with our defensive performance. When we needed our offense, they really came through.”

La Salle’s Sam Brown ended a seven-play, 48-yard drive late in the third with a 12-yard TD run. Then Explorers closed it on the fourth-quarter drive.

“We couldn’t really move the ball in the second half,” Imhotep coach Nick Lincoln said. “Our kids play hard. We just didn’t finish it out. We have to grow quick, because we have some tough opponents the next few weeks.

“We had a lot of penalties, but we’ll overcome it.”