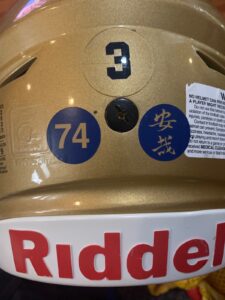 If no one knew, it looked odd. The La Salle Explorers were missing their left guard when they lined up for their first offensive play of their 2020 season Friday night at Manheim Township (Lancaster).

It was done for a reason.

The Explorers and their coach, John Steinmetz, wanted to honor a fallen teammate, senior guard Isaiah Turner, who died suddenly after practice on Sept. 4.

La Salle was called for a delay-of-game penalty, and in a very classy move, Manheim Township coach Mark Evans declined the penalty.

It was a cathartic turn for the anguished Explorers, who are still reeling from the loss of the popular Turner. La Salle is dedicating its season to him.

It very emotional entering the game, and then it became a football game.

“I’m really proud of the resilience of these kids and they’ve been solid the last two weeks,” Steinmetz said. “We’ve had some tough days. We had some ups and downs. I think it hit a couple of the kids after the game.

“We drove two hours and got off the bus and had our nice little tribute to Isaiah at the start of the game. We played very hard, considering what happened. We lined with no one in Isaiah’s position.

“Coach Evans is a first-class act, by the way, He was exceptionally gracious to us. He unfortunately had a similar incident several years ago and we spoke about it.”

La Salle established itself early. The Explorers took a 28-6 halftime lead on Brown touchdown runs of 28, 20 and 67 yards. Brown closed the show by catching a 25-yard pass for a touchdown.

“Offensively, we can run the ball, which was nice,” Steinmetz said. “I learned that even though we have a seasoned team with a bunch of starters back, we need to work a little on game-time speed. I was really surprised how we played as soon as we got off the bus.”

Manheim junior receiver Anthony Ivey, who’s had close to 20 scholarship offers, caught 9 passes for 106 yards and two touchdowns. His second score with 2:47 left to play put the Blue Streaks within a score of tying the game.

From there, Brown and La Salle’s ground game chiseled precious time off the clock.

“It was definitely a tough, emotional game, with the COVID-19 and the passing of Isaiah,” said Brown, who’s received offers from Michigan State, Wisconsin, Nebraska, Pitt, Rutgers, Tennessee, Texas A&M, Ole Miss, Vanderbilt and Temple, but not Penn State. “We wanted to make Isaiah proud and we know he’s looking down on us.

“We’re dedicating this season to him, and (junior guard) Brendan Krug did a great job stepping in for Isaiah. We’re all wearing Isaiah’s number and his initials in Chinese, because this would have been his fourth year taking Chinese.

“We’re doing this for Isaiah. We would want us to play.”