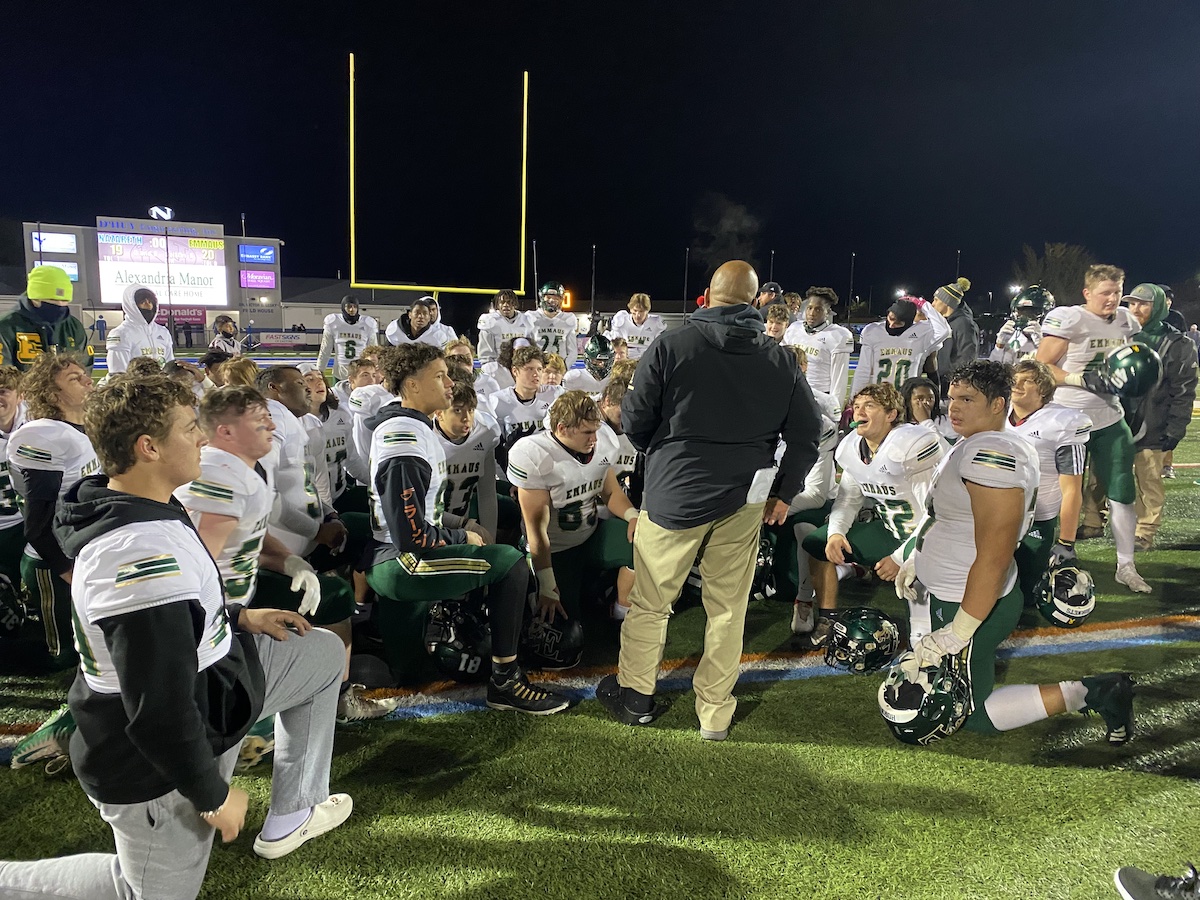 NAZARETH – Emmaus (8-3) went into halftime trailing Nazareth Area (7-4) 12-0. It was the big plays of Sophomore Quarterback Josiah Williams that ignited the Hornets’ offense in the second half.

“Before the game, I talked to them about it always comes down to crucial penalties, turning the ball over, and which team can execute under fire,” said Emmaus Head Coach Harold Fairclough. “We circled back to that at halftime and I said listen we are beating ourselves and we hadn’t had a drive yet that we didn’t have a penalty or turnover.”

Early in the game, on Nazareth’s second possession, quarterback Sonny Sasso powered in from nine yards out. Chris Bugbee’s kick was no good and the Blue Eagles led 6-0 with 2:06 left in the first quarter.

On Emmaus’ next drive, Williams fumbled the ball and Nazareth’s Broc Bender recovered it on the Hornets 32. Nazareth fumbled it right back to Emmaus. David Iobst recovered the fumble.

The play of the first half had to be Sasso’s interception. He somehow caught the ball before it hit the ground while maintaining his balance for the pick. Three plays later he found the end zone from one yard out and the Blue Eagles led 12-0 with 8:00 left in the first half.

Emmaus tried a 32-yard field goal attempt with 32 seconds left in the first half. But Cael Kratzer’s throw was intercepted by Nazareth’s Logan Hilarczyk. The score would stand at halftime, Nazareth led 12-0.

Emmaus wasted no time getting on the scoreboard in the second half. They capped off a seven-play, 68-yard drive as Williams hit David Iobst for the three-yard touchdown pass. Owen Garcia’s kick was good and Nazareth 12 Hornets 7 with 9:48 left in the third quarter.

Nazareth would get their last score of the game with 8:54 left in the third quarter. They needed two plays to do it. Tyler Rohn broke free right up the middle and went 69 yards for the score. Bugbee’s extra point was good and the Blue Eagles extended their lead 19-7.

Not to be outdone, Emmaus answered right back. They needed two plays to cut into the Blue Eagles’ lead. Williams connected on a big throw to Dylan Darville that went 83 yards for the score. It was 19-14 with 7:51 remaining in the game.

The Hornets take their first lead of the night

Emmaus took their first lead of the night on a three-yard touchdown run by Jared Groller who bulled his way in for the score. The two-point conversion was no good and the Hornets led 20-19 with 5:50 left in the third quarter.

The Blue Eagles had one more opportunity late in the game to retake the lead. With 2:12 remaining in the game, Tyler Rohn took the handoff at the Hornets’ three-yard line. The ball came out on the exchange. Gitski recovered it for Emmaus on their five-yard line to seal the win.

“Our guys made some big plays in the second half,” said Fairclough.