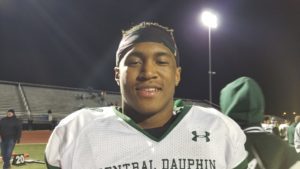 He heard the huffing and puffing, which was more fuel for the Central Dauphin junior center’s ears. So, the Rams’ offensive front went at the Downingtown West defense again. And again. And again.

Central Dauphin exploded for 465 yards rushing, averaging 9.48 yards a carry, in pounding home an emphatic 65-44 victory over Downingtown West in the PIAA Class 6A semifinals Friday night at Coatesville to play for the state championship.

It’s the first time the Rams (12-2) have reached the state finals since they defeated North Penn, 14-7, for the 4A state title in 2011. Downingtown West (13-2) ended an historic season by winning its first District 1 Class 6A championship since Downingtown split in 2003.

Central Dauphin advances to play the winner of Saturday’s other semifinal between Pittsburgh Central Catholic and St. Joseph’s Prep in the state title game next Saturday at Hersheypark Stadium.

To get there, Central Dauphin used an amazing third quarter in which the Rams scored 28 points. The Rams converted 5 of 7 third downs in the first half, and only had one third down on convert in the second half.

Rams’ junior tailback Timmy Smith led the way, rushing for a game-high 264 yards on 22 carries and scored four touchdowns—three rushing in the third quarter, when Smith rushed for 80 yards.

Smith was very appreciative of his pals up front, Mosey, along with Blaise Heshler, Jacob Hicks, Bryce Thoman and Chad Layton.

“It was pretty easy, and they (offensive line) made it easy for me,” Smith said. “I just followed behind them. I trusted them and you see what happened tonight. When we get our run game going, we can do anything.”

“We just felt we could run the ball down their throats,” Mosey said. “They were bending over and I could hear how exhausted they were. We have a chance to go for a state ring, and that’s motivating.”

The Whippets got within 51-37 at the outset of the fourth quarter, but successive Smith runs of 18 and 36 yards spelled another score. And on the next possession, Elijah Vargas, a 5-8, 176-pound senior, scored his second 44-yard TD run with 8:10 to play that sealed the victory for the Rams.

Downingtown West’s Will Howard completed 21 of 29 passes for 267 yards, and two touchdowns, but he also began the second half by throwing interceptions on the Whippets’ first two drives.

“That’s on me,” said Howard, who’s bound for Kansas State. “It was tough. There were a couple of break their way, but we knew we had to make few mistakes, and we did. This has been a hell of a ride, though.”

The first half was a crazy offensive display. Of the nine offensive drives, the teams combined to score on six of them.

Smith had 130 yards on 13 carries in the first two quarters, averaging 10 yards a carry. The 6-foot, 196-pound junior had runs of 13, 18, 27 and 36 yards in the first quarter. Much of that was a credit to the Rams’ offensive line pounding the Whippets’ defense.

Smith often had gaping holes to run through, and the times Downingtown West’s defense was able the get their hands on him, he still managed to drag a few defenders with him before going down.

Vargas was also punishing. He broke four tackles on his way to a second-quarter 44-yard touchdown that gave the Rams a 9-7 lead with 9:43 left in the half.

Howard got off to a torrid start, completing his first nine passes for 174 yards and a pair of touchdowns, a 12-yard toss to Pelkisson in the first quarter and a 71-yard strike to Tyriq Lewis in the second.