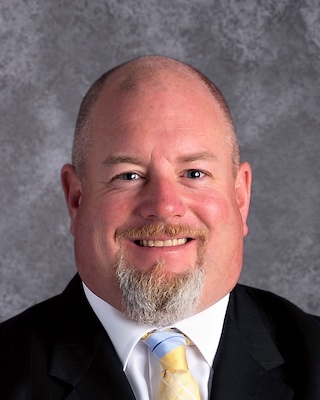 Back in June, former Head Coach, Eric Depew resigned. Longtime assistant coach Brad Hayek was named the new Head coach. We sat down and asked Hayek about his new role as head coach and what he expects this upcoming season.

What is your previous coaching background?

“I was the Head Coach of our Junior High program for three years, Moved to the Varsity team as an Assistant Coach and Special Teams Coordinator for five years, and have been the Defensive Coordinator for the past nine seasons.”

Do you teach and if so, what subject do you teach?

I was a PE teacher for 12 years, moved to the Dean of Students positions for the next five years, and then recently moved to the Athletic Director this past year.”

How many years have you been Athletic Director?

What is your goal for this team?

“Compete for a division, district, and state championship. We have the resources to do it and have built a competitive football program through the years so we know what it takes to get there. We just need to get the kids to continue to believe, be prepared, and compete for whatever obstacle gets thrown at us.”

What are your thoughts about the league you will be playing in?

“Our league is very competitive and each team wants to win, which makes great games week to week.  Anytime we can win games or even championships in our league gives, it gives you a true sense of accomplishment.”

Hayek was on Depew’s staff that won four YAIAA Division III titles and three District 3 Class 2A titles. The latest one came in 2021.